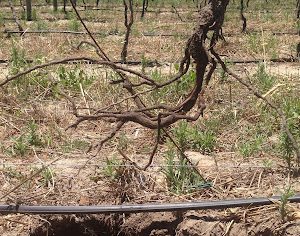 In this project, researchers wanted to determine if root pruning at planting may reduce the potential for J-rooting, without having a negative impact on young vine development.

–          Two planting methods were also evaluated namely digging a traditional planting hole vs using a planting spade to dig a slot in which the benchgraft was inserted.

–          Both trimming of roots to 4cm and spade planting reduced vine growth in the first year;

–          In years three, four and five, there was no significant difference in vine canopy growth (pruning weight) between treatments;

–          Despite initial reduced vigor where root pruning was applied, there was no difference in yields during year three, four and five;

SIGNIFICANCE OF THE STUDY:

According to the results from this study, root pruning can be used as a method to reduce the incidence of J-rooting, especially where a high risk planting method such as spade planting is used.