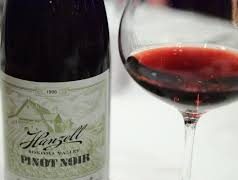 The aim of the study was to investigate the chemical and sensory effects of cold soaking and the addition of whole clusters and stems to Pinot noir musts.

Significance of the study:
In this study cold soaking overall had very little effect on the Pinot noir sensory properties. Whole cluster additions and stem additions produced wines with distinctive sensory properties. The effects (positive or negative) of these treatments were greatly affected by vintage variation.